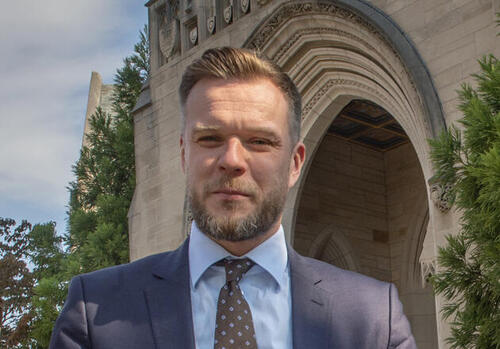 Gabrielius Landsbergis spoke to students and faculty at a Monday talk about the Russian invasion of Ukraine, China’s sanctioning of Lithuania and the need for the West to stand firm against autocracy.

The United States and Europe must reduce their economic and energy dependencies on China and Russia, Lithuania’s chief diplomat argued on Monday.

Foreign Minister Gabrielius Landsbergis gave a talk in the Humanities Quadrangle hosted by the MacMillan Center for International and Area Studies discussing Russia’s invasion of Ukraine and its global implications.

The minister argued that the Baltic states — Estonia, Latvia and Lithuania — and other nations once occupied by the Soviet Union had been correct to warn about the threat posed by Russia.

“The people in Lithuania and in the Baltic states more broadly have a very good grasp of what Russia is,” Landsbergis said in an interview with the News. “Therefore, we’ve always seen Russia as a threat, not just before or after Crimea, in 2014, but always. For 30 years we’ve said that Russia has not changed, that it’s an empire that’s looking aggressively at its neighbors.”

Landsbergis argued that many European nations had ignored the threat posed by Russia in order to gain access to cheap commodities — such as energy. For example, while shutting down its nuclear power plants, Germany built pipelines to import natural gas from Russia.

Lithuania, Landsbergis said, had been charged by Russia — for political reasons — the highest rates in Europe until Lithuania decided to build its own liquified natural gas terminals to secure energy independence.

The minister argued that the idea that trading with autocratic nations would make them freer and more democratic had been proven false. After China sanctioned Lithuania for allowing Taiwan to open a representative office — a diplomatic outpost that is not an official embassy — Lithuania made trade deals with democracies such as Japan, South Korea and Australia.

Landsbergis added that the West needs to be willing to pay the extra costs that it will take to not be reliant on authoritarian regimes. By diversifying economically — such as by having contracts with multiple countries for key commodities — democratic nations will gain more leverage over autocracies.

Prospective Global Affairs major Luca Girodon ’26 expressed approval for the minister’s argument for decoupling, but noted the need to temper idealism with pragmatism.

“Despite Minister Landsbergis’ optimism, one needs to keep in mind the reality of diplomacy — that there will always be some form of hypocrisy,” Girodon told the News. “For the United States to continue as a first world power and check Russia and China, it is inevitable that we will need to trade with nations with less than stellar backgrounds, such as Modi’s India or Bolsonaro’s Brazil, in order to maintain our economic advantage.”

The foreign minister spoke approvingly of the Western response to Putin’s invasion, especially President Biden’s push to sell weapons to and appropriate aid for Ukraine.

Landsbergis also noted that while European reliance on Russian natural gas has given Putin a potent short-term weapon, the European Union’s acceleration of plans for the transition to clean energy would weaken the punch of supply reductions in the medium- to long-term.

During the question-and-answer segment, some attendees asked about the possibility of American foreign policy moving in a more isolationist direction in the near future.

According to Landsbergis, American support for Ukraine and sanctions against Russia have been essential in the war effort. To him, victory in Ukraine — which he defined as restoring the pre-2014 borders — is an essential first step in promoting democracy in neighboring Kremlin-aligned nations such as Belarus, and ultimately achieving regime change in Moscow.

But Landsbergis noted that Lithuania’s precise foreign policy objectives may not necessarily be shared by the United States or NATO, the latter of which will meet for a summit in Vilnius, the Lithuanian capital, next year.

“[The event was] wonderful,” said Steven Wilkinson, director of the MacMillan Center. “One of the big things we do at MacMillan with this speaker series is bringing world leaders and international scholars to Yale and having students and faculty meet them is really just an important part of a liberal arts education.”

Landsbergis served as a member of the European Parliament from 2014 to 2016 and has served as Lithuania’s foreign minister since December 2020.