Recap: The Two Faces of Transnational Populism: a Perspective from Estonia 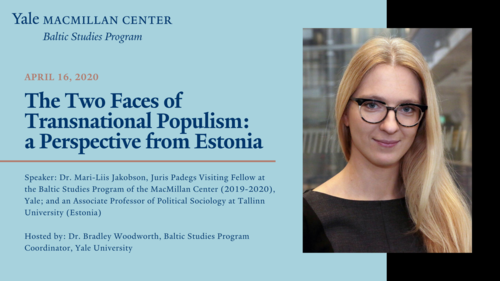 About the speaker: Dr. Mari-Liis Jakobson is the Juris Padegs Visiting Fellow at the Baltic Studies Program of the MacMillan Center (2019-2020) and an Associate Professor of Political Sociology at Tallinn University (Estonia). Her research relates to transnational migration, transnational politics, and populism.

Populism has become a hot topic for researchers and practitioners alike on an almost global scale. Yet, the research into this phenomenon has remained notably methodologically nationalist: both the causes and the effects of populism are predominantly analyzed within the confines of the nation-state(s).
While there are already some studies addressing this phenomenon on the populist left, right-wing populists are often treated as ‘parochial’, ‘sovereigntist’, ‘nationally individualist’, ‘distinctly anti-cosmopolitan, anti-internationalist’ and right-wing populism as even incompatible with transnationalism. Yet, there is notable evidence from radical and extreme right research that demonstrates that such movements are becoming more and more transnational, by building alliances, learning networks as well as initializing genuinely transnational organizations, despite their opposition to liberal cosmopolitanism.

This talk will argue that right-wing populism can indeed take transnational dimensions. Based on the case of the Conservative People’s Party of Estonia (EKRE), at least two different faces of transnational populism become evident, corresponding broadly to the understanding of transnationalization from above and from below, articulated by Eduardo Guarnizo and Michael Peter Smith. One face is manifest in the fact that the party is establishing branch organizations abroad and campaigning among Estonians who have emigrated abroad or are constantly commuting, using the freedom of movement of labor within the European Union, despite the party’s anti-immigration and Eurosceptic positions. The other face becomes manifest in the meta-frames used by the party leaders and its news outlets, giving the defining discursive structures of populism such as the true people, antagonisms with the morally corrupt elites and minorities, or heartland, a transnational dimension.

Based on interviews and textual analysis, the talk will outline the party’s strategy behind the two faces and propose a transnational research program for addressing the causes and effects of populism.